After arriving in Auckland following what might be the worst road-trip I’ve experienced, I spend the next day in, catching up on work, checking out what fun things there might be to do in Auckland (remember, I don’t plan, so I haven’t researched), and recovering from recent events. It’s important to take some days to relax and catch up on your life when you’re traveling long-term. I generally do this in those “in-between” locations which I’ve spoken of but, there’s been a lot to catch up on lately and I got a bit behind during the days spent in the camper van. Ruth, the owner of my AirBnB, dropped me off at the grocery store the previous night so I could pick up a few things, so, after working and catching up on my life for most of the day, I cook up some nice fish, veggies and sweet potatoes (a New Zealand favorite). Cooking for myself is a treat as I get so little chance to do it.
I wake up in the morning ready to take on the world (okay, perhaps not the world, but Auckland, at least). Ruth drops me in town near what’s known as the Viaduct, an area on the waterfront with many restaurants, bars and cafes, as well as a fish market. It’s early and I stop by a local place for coffee and breakfast. People are sitting outside and, as it’s about 50 degrees Fahrenheit (10 Celsius), I decide Aucklanders are crazy. Still, I’ve just come from nearly four-months in Southeast Asia so, perhaps, I simply have blood as thick as a scotch and soda with melted ice (for god sakes, just drink the scotch straight up).
Following a lovely breakie, I stroll down the wharf admiring the glamorous yachts which are docked along the quay. I speak with a couple of the crew members who explain that the ones in front of me are the 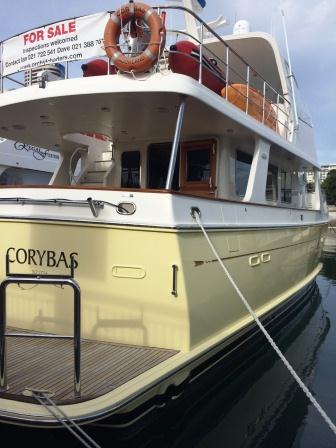 personal yachts of private owners (read – really rich people) who have them simply for their own enjoyment (and to pick up women, I’m sure). Captain Dave offers to take me on a tour of a couple of the yachts which the company he works for, Decked Out Yachting, charters for day and multi-day trips. He opens the gate for me and we walk down to the yacht Corybas. Built in 2010, this yacht has old-school wooden touches updated in modern design. It sleeps six passengers plus a crew of two to four, depending on the clients’ needs. Dave took this one down to the Fjordlands for three-months with a client. It’s beautiful and I think I would have been much better off with a man inviting me for a trip on Corybas instead of Camper van Beethoven. We move on to check-out L’Affaire (I wonder about the origin of the name). This one is older (built in 1993 and sleeps up to nine guests) and has less personality, but is comfortable. It has a living room with sofas and a TV, a dining room set which would look nice in my house (I never did buy one for my dining room), four bathrooms, and many areas to sit and eat, or enjoy some cocktails. After a while, Don must go meet some delivery people and I must leave the Lifestyles of the Rich and Famous to go in search of The Real World – Auckland.

I walk across the small pedestrian drawbridge and into the Maritime Museum. The museum celebrates the long history New Zealand, and more specifically Auckland, has with the sea. Before heading inside, I step out onto the pier to watch the midday cannon being fired. While the school-group standing on the pier seems to be excited by the loud boom and smoke which follows, I would find it much more exciting if there were maybe a certain rude Englishman standing in front of it (see Sleeping With the Enemy); but I digress.
The first area I come across upon entering is the theatre. As there’s a sign on the door saying something like “Closed to the public – Only for special groups,” I walk inside, take a seat. (I’m special, right?), and watch a video telling of the Māori and their boats. 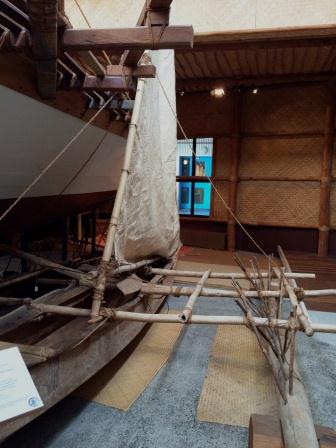 In the next area, I learn all about the various boats used by the indigenous population, including the Māori canoes called Waka (I can only think this might also be the name of Fozzy Bear’s canoe – waka-waka). I find it amazing that the Māori memorized their routes (I can’t even remember where I put my keys) and even helped with this by turning them into song.
My Key Song (set to the tune of Let It G)o:
“Where’d they go? Where’d they go? I can’t find my keys no more.
Where’d they go? Where’d they go? I had them when I walked in the door.)
I continue on to read about Captain Cook’s journeys before entering New Beginnings, a section which describes the immigrant experience of coming to New Zealand. It’s set up very much like the German 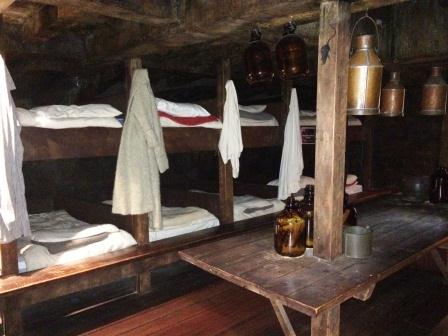 Emigration Center in Bremerhaven (read Emigration, Immigration and Climatization) and, as I enter through the doorway, the wooden floors below me begin to move as if I’m on a rocking boat (perhaps I need to cut out that morning cocktail). In front of me I see a staged cabin, filled with bunk-beds and various personal items which might belong to an emigrant family crossing the ocean in the early nineteenth-century to begin their new lives in distant lands. I move on to view rooms from the early twentieth-century before entering the next display about whaling and ferries.
Next, it’s up to the top floor where I see Black Magic, the boat which won the 1995 America’s Cup for the New Zealand team. Captained by Sir Peter Blake, this holds huge national pride for New Zealanders and brought great respect to New Zealand’s yachting community. I walk through the displays to learn that, tragically, in 2001, Blake was killed by armed intruders while his boat was anchored at the mouth of the Amazon. 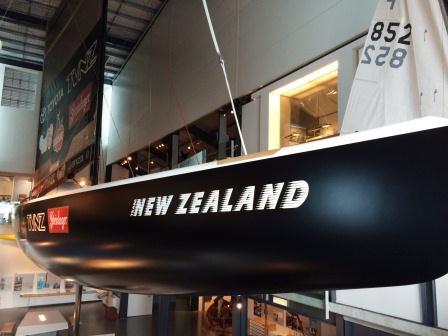 The rest of the museum includes the Edmiston Gallery, which houses paintings of ferries, ship models and, my favorites, figureheads from the bows of ships.Next is the Kiwis and the Coast display with a model of a throwback beach house, a navigation room and fishing industry room. 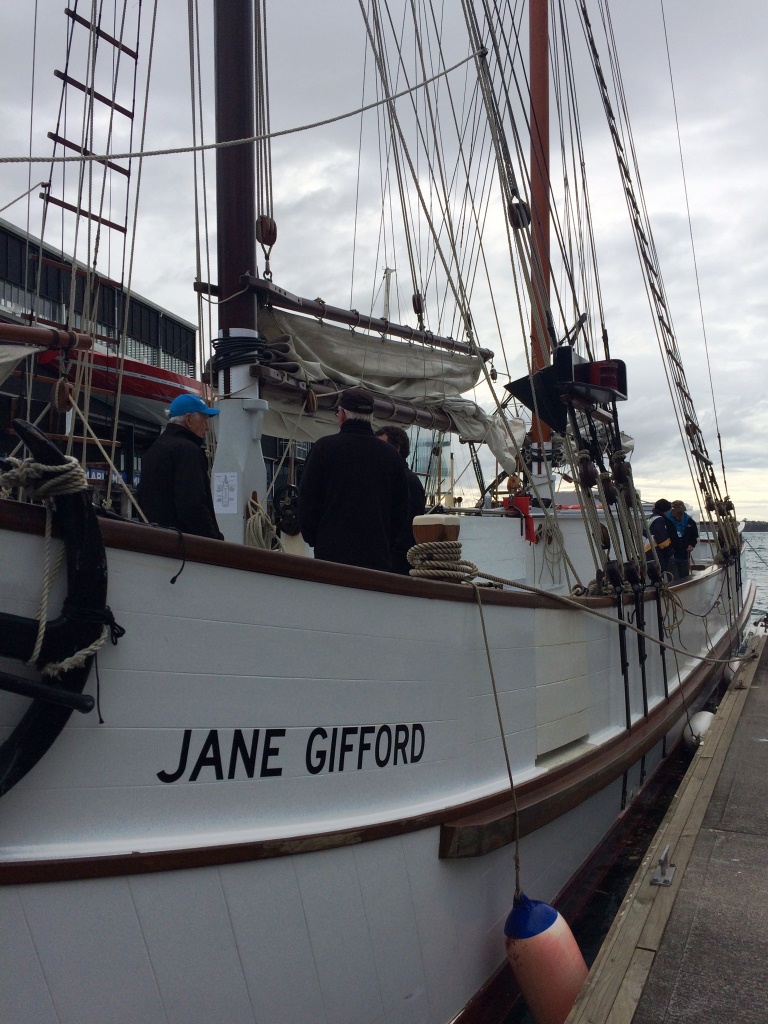 After an hour-and-a-half enjoying the museum, I walk onto the pier outside and board a sailing boat which takes me on a one-hour cruise around Auckland Harbour. We’re offered traditional yellow-fishermen’s coats to wear which I accept (though it’s a shame to cover up my pretty new red coat which I had made in Vietnam).

view of Auckland). I sit and talk with an American family here in vacation, as well as a large group of Korean students who, like most people I met in Asia, just want to speak English and get their photo taken with westerners. The yellow fishing jacket keeps me surprisingly warm until the rain begins to fall and, though it also keeps me dry, I’m ready for some hot cocoa when we arrive back at the pier.
I stop in The Crew Club, a restaurant on the pier to grab some hot cocoa and Wifi where I map out my return bus trip on the AT app., the app. for Auckland transportation which I’ve downloaded on my iPhone (Google Maps is also handy for this). I walk over to the bus stop which, for the low-low-price of NZ$2.50, and a combined walking and bus trip of thirty-two minutes, leads me back to my AIrBnB to warm-up and wash-up for a girl’s night out.
Tomorrow – Wine, Women and Song.

Sleeping With the Enemy Wine, Women and Song