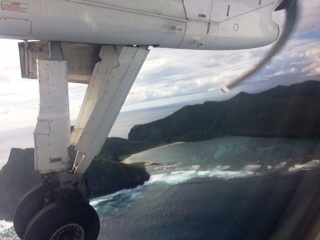 Just after 2:00pm my 29-seater plane approaches Lord Howe Island (LHI). I know this because the folks on the right-side of the plane are clearly entranced by something they’re seeing and, unless it’s that Twilight Zone episode with the crazy man walking along the wing of the airplane, I think we’re approaching LHI. I get the attention of the man across the aisle and ask if he can snap a photo for me. He takes the photo but the airplane photo bombs the island. Eventually the pilot makes a turn which allows me to grab my first stunning view of the rocks jutting high up out of the sea along with bays with pristine beaches.
Before you know it, we’re gliding along the landing strip at the tiny airport. I walk down the steps of

the plane and head over to the tiny cottage-like airport building where I’m greeted by my friend Kira. Kira’s an Australian who I worked with on Disney Cruise Line. We became fast friends after meeting in the officers’ bar when, during her first week on the job, she came in, sat down and criticized the room-service food. Kiera had been told that part of her job would be to improve the quality and presentation of it. What she didn’t know is that we were sitting with the food manager who was in charge of it. The large, bald, German guy spent the next ten-minutes telling Kiera what she could do with her opinions. Following that, he apologized to those of us whom he had been sitting with, excused himself, and walked out.
“Welcome aboard,” I said to her while lifting my glass of wine in a toast. How can you not be friends with someone who makes that memorable a first-impression?
After the customary hugging of two old-friends meeting in a tiny island in the middle of the Tasman Sea, the luggage is taken off the plane and placed onto a cart which is then brought over to the building. I browse through and am pleasantly surprised when I spot both my guaranteed bag and my stand-by bag. We grab my bags and head over to the car where we meet Kira’s boyfriend Brenden, another Australian who Kira met on the island.  We climb into the Land Rover, a car with a basic inside (no official backseat, but two-benches which line the sides of flat back floor, and Brenden takes us on a short island tour. This mostly includes pulling up to a few look-outs in order to look at the truly incredible scenery. On my travels I’ve been to some of the most beautiful beaches in the world, but I’ve never seen water this color. For those of you now saying, “Yeh, yeh, I’ve seen those indescribable turquoise waters in fill in the name of your island here,” well, compared to this, those would be the basic Blue color in the box of Crayola. 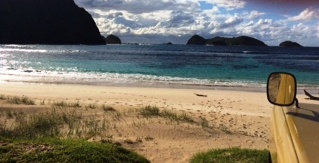 We pass some of the small buildings and landmarks which I’ll be exploring in the next week or two while Kira and Brenden tell me a bit about the history and local gossip. Finally, we head over to Thornliegh, the historic farm on which Kira and Brenden live.
Located along Lagoon Road, Thornliegh is a late-19th-century farmhouse with the vibe of a retro-beach-house. After showing me to my room, Kiera takes me on a tour of the place where they live for free, in exchange for fixing up the property to attempt to bring it back to its former glory. Built in 1890 by an old whaling captain, Phillip Digman acquired the property at the beginning of the twentieth-century upon the captain’s departure. Generations of the family lived here and Thornleigh became the central-hub of island life, with its milking sheds, fields filled with fruits and vegetables, cattle, butchery, and the island’s first soda-pop machine (yay bubbles!). But wait, there’s more; the place also housed the pool-hall – really just a pool table with a bunch of drunken men hitting balls and passing out on the way to the drop-toilet (the outhouse).


It hasn’t been a working farm for forty-years and the house fell into major disrepair when the last generation of Digman’s died and his wife Patricia hit the bottle a little too hard. When she died, the property was willed to a nephew of the Digman’s who is committed to bring the property back to its original beauty and the farm to producing crops.
The place has a newer area and an older wing, with bedrooms which make me question Kira about the possibility of ghosts. Kira tells about two she’s encountered; one, believed to be Miss V. Walsh (Patricia’s sister), opens doors to her old room and messes with the clocks, and the other (unknown ghost) doesn’t like the band AC/DC (afraid, perhaps, it will lead to the Highway to Hell) and turns it off whenever it’s played. We spend the night cooking dinner and catching up.
The following day, Kira and I walk around the neighborhood, meeting some of the locals. Every driver of every car that passes gives a tiny wave with their finger (the pointing one, not the swearing one) which is the island wave. We stop by the co-op and Joy’s Market to pick up some food for dinner. The choices are limited and the prices are exorbitant as all but a few of the fresh fruits and vegetables must be shipped from the mainland. It’s important to remember that there’s no ferry service as the island is 445 miles (717 kilometers) northeast of Sydney. A one-way air ticket costs US$350.
The next day is spent exploring on my bike. Kira works for a local tour company who also rents bikes and they’ve been kind enough to loan me one this week. I start off by heading to the museum. Admission is free and they have some interesting displays on the history and natural environment of the island. More importantly, they have the only public WiFi. Most people on LHI don’t have Wifi as it’s so darned expensive. As it’s important for me to tell you about our trip, WiFi is needed in order to do so. I purchase a 30-consecutive day ticket for AUD$55 (US$40). This wouldn’t be so bad if it weren’t limited to a total of 500mb. Yesterday I used 100mb telling you how I got here. Oh, and cell phones? They don’t work here. Kira has told me that due to the lack of information overload which comes with the connectivity of modern life, LHI is stuck in the 90’s.

I spend an hour in the museum looking at the various albums containing stories of the history and characters of the island as well as some birth and death certificates of the original settlers. I learn that LHI was discovered on February 17, 1788 by the crew of the HMS Supply which came upon it quite by accident while sailing from the newly established settlement of Sydney headed to form a new penal colony on Norfolk Island. The seven-square mile island was settled in 1834 by three families. One of the earliest settlers was Nathan Thompson, an American, born in Somerset, Massachusetts. After Nathan’s son and wife died, he was sailing his whaling vessel near Gilbert Island when he saw a canoe with two girls, a woman and a young man. The youngest girl, Bogie, was about twelve-years-old and had been betrothed to a chief on a nearby island. She escaped in a canoe in the night with some of her caretakers. Nathan took them aboard his ship and after being shipwrecked on a reef, they finally made it to LHI and, when Bogie came of age, Nathan married her.

I spend the rest of the day riding my bike around exploring the island. I stop at the war memorial which lists the nine men who dies in World War One, the twenty-four who died in World War Two, and the two who died in Vietnam. I continue on to the liquor store, which is conveniently located next door in the attached building housing the board offices (the island government) and take a walk

through the lawn bowling center as well as the one school on the island (it’s a primary school and, once children reach seventh-grade, they’re either home schooled, sent to boarding school on the mainland, or their families move to the mainland. I ride over to the landing strip and watch the flight land (yes, singular, as there’s only one flight per day on weekdays and 3 on weekend days), and generally absorb the local color.
I ride on to find the general store and, once again, stop at Joy’s Market and the co-op before picking up the wine I’d bought earlier at the liquor store yet didn’t want to carry around with me all day. As I’ve only brought a small backpack with me, I fill the backpack with my various groceries as well as shoving a potato and a pack of tofu into each pocket of my fleece before heading off for the short ride back to Thornleigh.

Tomorrow – An island BBQ.
Lord Howe Did I Get Here? Farmer Jane and Kongy