This morning I awake, hop in the shower (it’s one of the few places I’m warm), and head out through the trees to stand on Lagoon Road and wait for Peter, from Chase ‘n’ Thyme Tours, to pick me up. Though not originally an islander, Peter is married to a Thompson girl, a descendant of one of the first settlers, and has lived on the island for twenty four-years.

At 9:00am on the dot, Peter’s white van pulls up, fully loaded with nine-people, none under the age of sixty. LHI is known as a place for the “newly-wed or nearly dead,” especially in the winter. And while these folks may be of the senior set, they’re raring to go and I would even describe some as a hoot. Peter takes us down south to begin the tour as, he says, he wants to give us time to prepare for the hustle and bustle of the CBD (Central Business District). He explains that today’s tour will end at about 1:00pm, which is before the 3:00pm rush-minute. Rush-minute is at 3:00pm because that’s when the one school on the island – with thirty eight-students in total – lets out. Also, the mail comes in on the once-daily flight which lands just after 2:00pm and is then brought to the post office, sorted, and ready to be claimed at 3:00pm. There is no mail delivery on LHI; if you don’t stop by the post office for a few days , if he sees you on the street, Stevie, the Post Master, will shout, “Come get your mail!” as it’s taking up too much room.

As we drive, Peter shows us the 3,000-foot-long airstrip which they’ve just spent AUD $8 million repaving. It actually only cost AUD$2 million for materials, but it cost AUD$6 million to ship them to the island. We learn that LHI has twenty-accommodations with a total of four hundred-beds, thus, the island’s tourist count is capped at four hundred per night. Still, with this limitation, tourism is the top industry on Lord Howe.

We then make our way to the island’s waste management facility, also known in Australia as “The Tip”. Being an island, LHI is very aware of its trash as there’s no place to store it. We see piles of old bicycles stacked to send to the mainland on the Island Trader to be recycled for kids and others, as well as aluminum cans which are crushed, packed as a cube, and also shipped off to the mainland for recycling. We also see large bags of broken glass which is crushed into tiny particles and used as the first layer when building roads. Yes, you might be bicycling over last-year’s beer bottle. It gives new meaning to “one for the road.” (Thanks for the joke, Peter.) We stop by the weather station in order to pick up the report for the next few days, as well as what is considered a “must-do” for tourists on LHI, watch the launch of the daily weather balloon. Unfortunately the weather balloon is having a wardrobe malfunction and can’t be launched today. Still, this gives us a chance to meet Bill, the Bull and some of his non-testicular cohorts. As of

five-years ago, cattle can’t be used for food or milk here as, while these guys look like some of the healthiest cattle I’ve ever seen, the country’s agriculture department requires very specific things for processing of meat and dairy for public consumption. They’re very conscious that, if some bad beef got out, and forty-people became ill, it would be nearly impossible to air-evac. all of them off the island. Due to the cost involved in shipping the machinery necessary to meet government processing standards, well, it’s much less expensive to ship in the meat itself. So these cattle have a nice life of grazing in their pasture and enjoying the fresh Lord Howe air. This medical issues is also a reason that they fully enforce the national bike-helmet law as, the two-bed hospital, which has a small emergency-room, is ill-equipped to deal with closed-head injuries. We continue our tour where we see a variety of wildlife including the famous Lord Howe Wood Hen. This is the only place in the world where these are found and, thirty eight-years-ago, due to rats beings brought over on ships, there were only thirty left. Thanks to a concentrated rat eradication effort, there are now 330 of them in the world, all on LHI. We also see a whale putting on a show far off shore. While it’s not unheard of to see a whale here, it’s not all that common. In fact, this is only the fifteenth whale sighting for Peter. And this whale is breaching all over the place! Well, not really all over the place; strangely enough, this whale has breached fifteen to twenty times in the same exact place.

We make a stop at Peter’s house where we enjoy freshly-baked jam-muffins which Peter’s wife Janine has prepared to go with tea and coffee. This is how it goes when you take a tour on a small island; you stop at the guide’s house for coffee before continuing on. We continue on to see more island views and landmarks before Peter drops us at our desired locations. This is a great way to really appreciate all of the history and intricacies of the unique place. After hanging at the museum and taking advantage of their VEW (very expensive WiFi) – I’ve used up my pre-purchased, thirty-day supply in five-days – Kongy, Farmer Jane and I head over to the golf club to enjoy their weekly fish-fry dinner. It’s a busy night with about twenty five-people inside. After a cozy-night’s sleep, I head down the path of Thornleigh and walk five-minutes to the small building housing Lord Howe Environmental Tours. This morning I’m taking one of their glass-bottom boat tours. I enter the shack and, like everyone else on today’s tour, I turn down the offered wet-suit in case I want to snorkel. (There will be no snorkeling as it’s effing freezing!). The most clothing anyone removes are their socks in order to wade through the calf-deep, cold water.

Lord Howe Environmental Tours is owned by Dean, who used to be a Park Ranger on the island prior to starting his own business. As is common on the island, many families work in the same business and, Lord Howe Environmental Tours is no exception. Dean’s mother, Jill, and his wife Roslyn work the desk and office part, while Dean and his father, Ken, take
the tourists on the boats. We head on out and, during our excursion, we’re lucky enough to see a green turtle 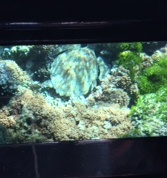 resting in the rocks, as well as a stingray lying in sand. While this cold-water coral isn’t quite as colorful as bright coral of warmer climates, the underwater views are spectacular. This may just be the least polluted water I’ve seen anywhere in the world. We see underwater creatures which Dean describes as “Sequential Hermaphrodites” and things with “jeweled gonads.” (Insert your own joke here.) 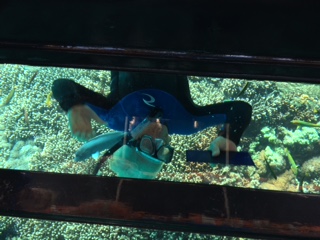 I’ve been told one other great sight on this tour is when Dean removes his shirt and dons his wetsuit in order to snorkel under the boat and feed the fish. Apparently, Dean works-out.

Unfortunately, just as there was no weather balloon launch yesterday, there’s no seeing of the six-pack today as Ken gets the fish-feeding duties. After a few hours, we head back in to the office where Jill has prepared some wonderful tea and we gather to chat about or various adventures on this special island.