And we’re off! It’s time for Brisbane and, after a less early morning than some flights (yet too early for me), I grab an Uber and head off to the airport. This is only my second Uber ride – the first being last week, from one AirBnB to another – and, while I’m not positive the driver took the most direct route, it goes smoothly.

I arrive at the airport slightly nervous about the weight of my luggage (when am I not?). I’ve, once again, packed strategically. Having learned that, in Australia, you can fly with an unlimited amount of liquid in your carry-on bag, I pack my toiletries in the carry-on and stuff the checked one full of clothes and shoes. The checked bag weight limit is 23kg (50 pounds) and, prior to leaving for the airport, I used my handy luggage scale (hang the bag on the hook and lift) which showed mine was a close, but not over, 22.70kgs. Knowing I’m good there, my only concern is my carry-on. Without anything in it, my carry-one weighs 4kgs. The weight limit is 7kgs (15 pounds). As I’ve put my toiletries in my carry-on, well, liquids weigh a lot. (That’s what prevents you from bringing a keg of beer on board.) I could have paid AUD$40 (about US$25) when I checked in online but decided to gamble. If they weigh the carry-on and I must check it, well, so be it. If not, I just saved a bit of cash which, if this were Asia, could buy a week of food or possibly a night in a hotel room.
I make pleasant talk with the Virgin Airlines desk agent (not easy, as I haven’t had any coffee). Still, she’s very nice and clues me in on her favorite airport coffee shop. I drop my bag on the conveyor belt/scale and, when 22.70 pops up, she congratulates me on a fine packing job. After issuing a paper boarding pass (I have an electronic one and would have been happy to save the paper) she sends me on my way. In the past, at this point, I would have breathed a sigh of relief; but I know better. In Auckland, they threw a surprise scale in at security, so I won’t be at ease until I’m on that plane.
After stopping for a quick cup of Joe (does anyone still use that phrase?), I head over to gate 41 to wait. Following a few minutes of pleasant conversation with a couple from North Carolina, the flight is called and I board my fairly small plane wondering if my bag will fit inside the overhead. I seamlessly lift my bag and place it in the overhead without a struggle and take my seat. The woman assigned the seat directly next to me also sits. After a few minutes of listening to her cough like a chain-smoker at a campfire in Delhi, India pollution, she blurts out, “I don’t think I’m contagious anymore.” Fabulous! She drags out her tissue and continues to cough, while I try to convince myself it’s mind over matter. “I will not get sick, I will not get sick.” (I’ll let you know in a few days whether this worked.)
The flight is short – only an hour – which leaves me no time to sleep. Still, they have a cool onboard entertainment system which I’ve never seen before. You download the Virgin Australia Entertainment app. on your own electronic device ahead of time and, when you board the plane, just open it up, connect to the Virgin Australia network, and watch movies, TV shows and more. Pretty cool. I choose to write and read.
The lady next to me also chooses to read? Unfortunately, what she chooses to read is on my iPad.
“Do you always write about the people who sit next to you on planes?” she asks.
“Um, yeh, pretty much.” I reply.
“Well, I think that’s terribly rude. I was telling you about my cough out of courtesy and to put you at ease. I didn’t expect to be insulted.”
“I appreciate that. And I also told you my cough was due to allergies to put you at ease. And I don’t think I’m insulting you. We’ve all been there.”
She goes on to tell me how she reads a lot (apparently her reading is mostly what other people have on their screens) and that she was an English teacher and thinks my writing is “crap.” I tell her she’s very entitled to her opinion (heck, she can even write that if she wants) and ask why she would be reading what was on my screen anyway. She becomes just a bit flustered and says something about looking out the window and seeing “cough” on the screen. She soon collects her things, stands up and moves to another seat. While some people swear by Vitamin C in order to avoid getting sick, perhaps you just need to write about the sick person in order to avoid it. In the end, I write what I write. It’s never with malicious intent; it’s simply my experience of traveling around the world without a plan. I hope she feels better soon. Colds make me crabby too. 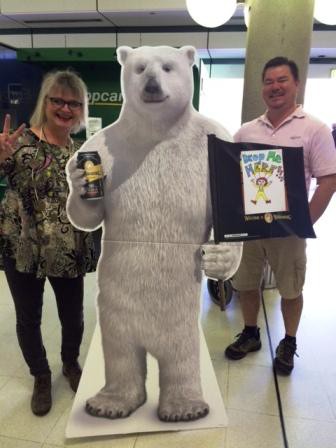 Just over an hour later, I arrive in Brisbane. I immediately stop in the first restroom to wash may hands. I head down to the baggage claim, collect my bag, and turn to see a life-sized bear cut-out (well, an actual bear is probably larger, but this is at least my height) with two life-sized real people next to it. The bear is holding a “Drop Me Here!” sign with a nice rendering of my logo. These are Farmer Jane’s parents (you remember her from Farmer Jane and Kongy). We’ll call them Mark and Janette for now but I might find them a fun nickname later. We’ve never met but them, and their bear friend have made an impression. We climb into the car and drive over to their house where I meet Yuki, their dog, and we have tea (myself, Mark and Janette; Yuki doesn’t much care for tea).
While I travel without a plan, Janette has a bit of a plan. After I repack my bags to throw a couple of days clothes into my carry-on bag without worrying about a weight restriction, Janette and I head off in her convertible for a short road-trip to Hervey Bay to stay with her friend Rosemary for a couple of nights. On the way we’ll be passing some of “the Biggies” which did not have the honor of winning as the destination but who have expressed that they’re simply honored just to be nominated (actually, these weren’t even nominated but don’t let them know). And, as Hervey Bay is very close to Bundaberg, well, it looks like I’ll have company visiting the Rum Bottle (I hate to drink alone).
Tomorrow – on the open road.
Yo-Ho-Ho and a Bottle of Rum A Big Drink