I spend the evening in Van Morrison watching a bad movie on my tiny DVD screen. Having already watched my previous collection, which I’d picked up in Brisbane, I found a new collection at a DVD store outside of Caloundra. There wasn’t one movie in the bunch which I’d wanted to see, and it’s amazing how many famous actors were in films which, either went straight to video or were released in theatres and so bad that the stars hope you’ve forgotten them. And as far as campers go, I’ve found tent campers to be more approachable as, the popular, fancy campers have TV’s, microwaves, stoves, ovens, satellite dishes, Wifi and more. Heck, some probably have wine coolers and, perhaps, helicopter landing pads. As I have a DVD player (a tiny screen flipping down from the ceiling like the old aircraft ones which is run through the van radio powered by a separate battery from the one which starts the van), my evening entertainment tends to be a DVD before turning to reading (currently Amy Poehler’s Yes Please).
I awake in the morning and decide to cook myself a spinach omelet. I’d stopped at the store the previous day and picked up some items before I decided to completely give up on my “refrigerator” which has worked for a total of about twenty-minutes during this trip. My campsite is near the barbecue are of the holiday park and, as I have a gas stove included with the van, I decide it would be good to use it. Thirty-minutes later, I’m enjoying a spinach, tomato and cheese omelet and a cup of fresh “brewed” Nescafe. (Yup, Asia ruined this coffee snob’s tastebuds and Nescafe is now an acceptable form of coffee. I promise to go into treatment on my return to the U.S.)
After cleaning up, I call Spaceship Camper Vans to, once again, extend my rental, before stopping by the holiday park’s office to extend my stay. It was lovely falling asleep and awakening to the sounds of the ocean (absolutely worth it not sleeping with my earplugs here). The couple camping next to me has agreed to store some of my refrigerated items in their camper for the day and I head down the stairs and to the beach.
It’s an overcast morning and, as I dip my toe into the water, I have serious doubts about whether I’ll dip any more. Still, I march on (or perhaps I tiptoe). When the chilly water finally reaches my girlie-parts, I decide to back off and head back towards the sand. As I sit there, the sun finally makes an appearance and I realize that I haven’t applied sunscreen. I grab my spray from my bag and, as I rub it in, the sand sticks to it and it’s as good as the exfoliation I received in Bali (read Rub Me, Scrub Me, Bathe Me in Flowers).

I sit on the beach most of the day, except for the forty five-minutes that I walk on the beach passing by people, dogs and horses. I enjoy this relaxation time as, I’ve been traveling for nine-months and, truth be told, I’m really very tired. I could use a week in a five-star resort (heck, 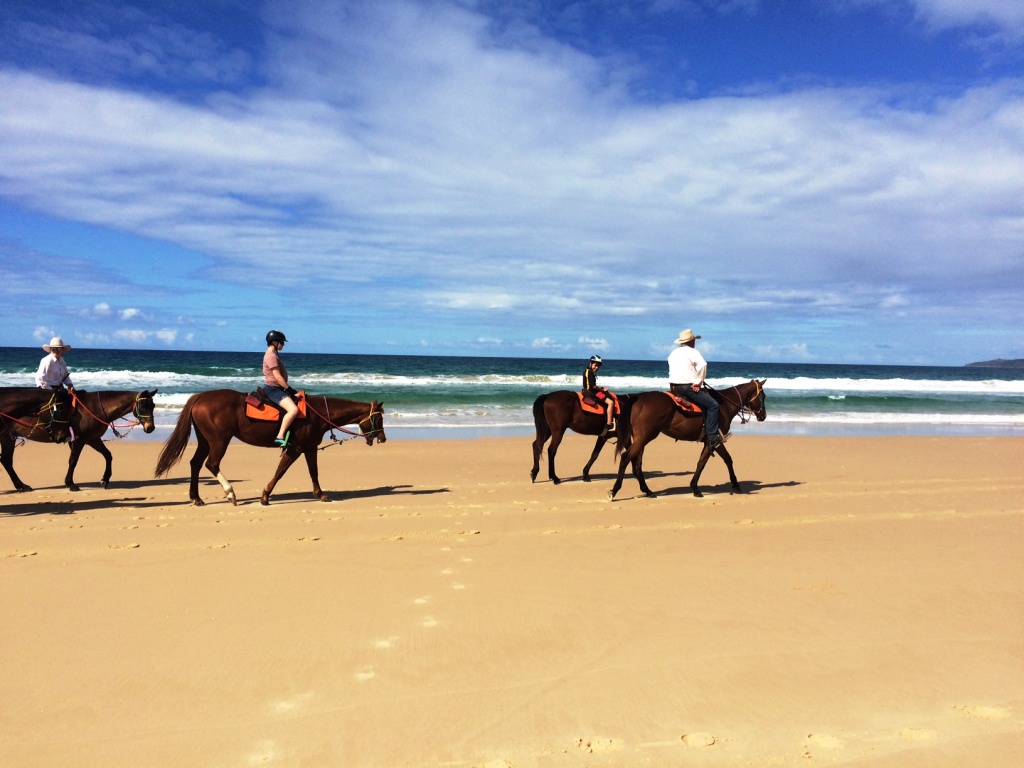 I’ll take a four-star resort; I’m not picky) with no work to do. Unfortunately, I have a one-to-two-star wallet and am considering my future. I spend my beach time writing and reading (because that’s what writers do) before heading back to the Rainbow Beach Holiday Village, grabbing my bottle of wine, loaf of bread and jar of Nutella from Van Morrison and my brie and some other fancy cheese from my neighbors before heading across the road to a picnic area beside the beach to enjoy a little civilized picnic.
A few hours (and glasses of wine) later, I walk back over to the Rainbow Beach Hotel and enjoy a pint of beer for dinner (don’t judge me). I then return to the holiday park to spend the evening with Van Morrison and Robert Downey, Jr. (if only this were real life).
I awaken in the morning to the sounds of crashing waves and a similar plan as yesterday. The only difference is that it’s sunny from the get go. I stop in a little cafe and grab a bad breakfast burrito (I’ve been jonesing for a taste of my Arizona where I’ve lived for thirteen years) and pick up the free WiFi from the Adventure Travel Bugs next door. I ask the girl there if she knows of any volunteer opportunities (I haven’t forgotten) and am told, “I think Rainbow Beach Hotel will let you stay free in exchange for work.” Really? This is neither working nor volunteering. It’s really just slave labor and I’m getting tired of people suggesting I become a housekeeper, fruit-picker, or short order cook. I’m looking for a career.
Following breakfast, I jump in Van Morrison and drive fifteen-minutes out of town to Searys Creek. Tim, the guy at the skydive center told me this was a peaceful place which he liked to enjoy, as it’s spring-fed and quiet during the week. After finding the parking lot without trouble, I stroll along the walkway for about five-minutes before I hear water rambling over a small waterfall. I’ve been warned that the water is cold, and I creep timidly down the stairs and step into the water. It’s definitely cool but, as I’ve given up on warm water, I step in to my mid-thigh. Tim mentioned something about fish and eels and, as the water is spring fed and is crystal clear, I look around and see, what seem to be a

few long, squirmy things. Sure, I’ve been told the eels aren’t dangerous but, as we all know, everything in Australia can kill you (not true but, you know, maybe). I imagine one is swimming towards me and, like a crowd at the zoo running from a lion on the loose, I climb up the stairs in a small panic. When I stand up and look back, it appears my eel might possibly have been a line of algae swaying with the current and, his friends might have been some sticks. Choosing not to take any more chances (I mean, how can I possibly relax with everything trying to kill me, including my ceiling fan?!), I decide to sit in the sun on the wooden platform and read for a bit.
As I make my best attempt at some peaceful reading while communing with nature, the cars on the road directly above the spring speed past, disturbing the peacefulness of the spring-fed waterfall. I finally realize that, for me, the ocean waves crashing onto the uncrowded sands of Rainbow Beach might be a bit more relaxing, so I return to the van and drive back to the coast. 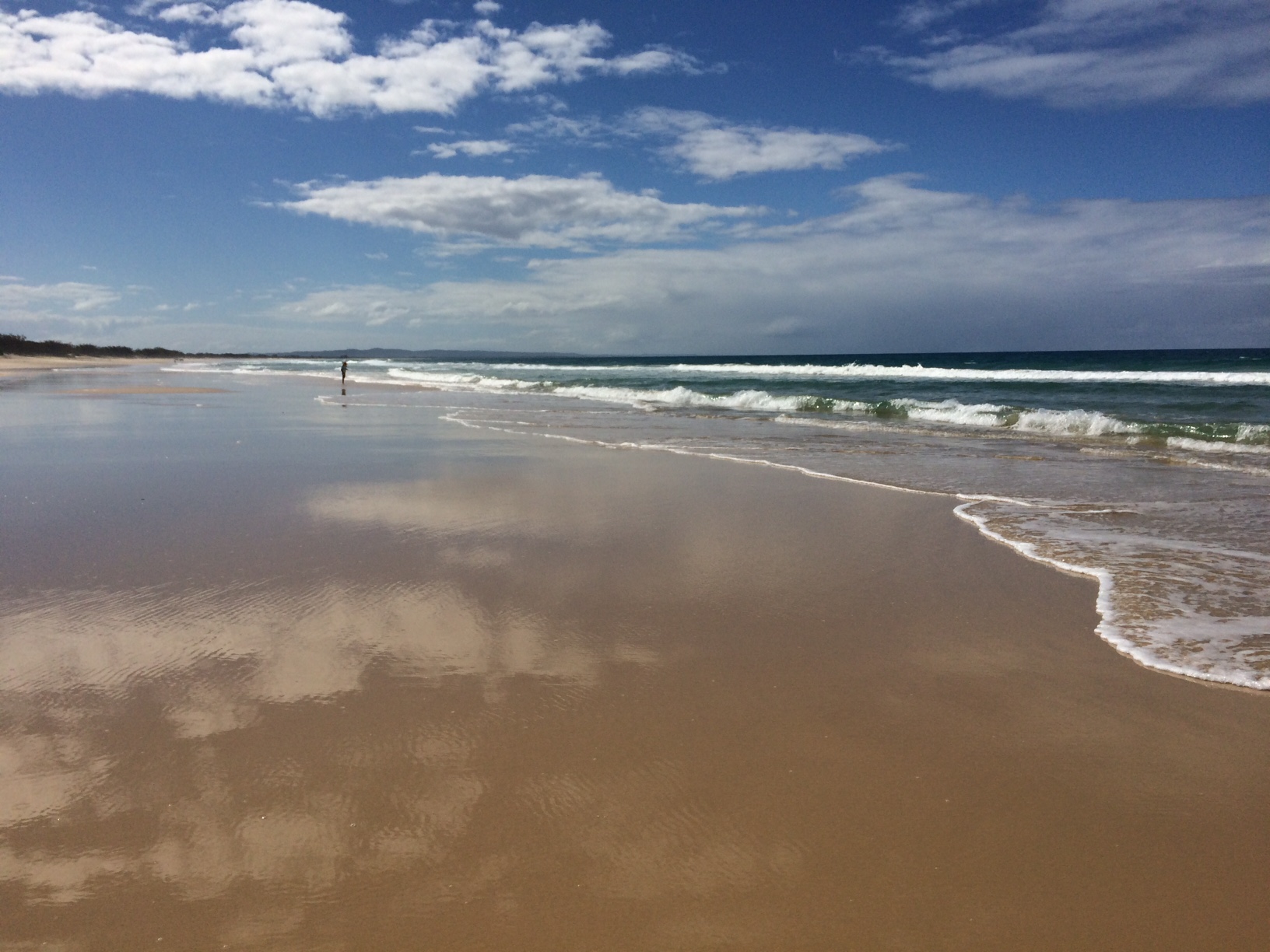 The bright, shining sun today makes the water feel warmer and I plunge in. (Okay, perhaps it’s more of tentatively step in but, as they’d say in Asia, same, same, but different.) I laugh as the tall waves crash on top of me and enjoy the surf as I gain elevation when I ride on top. Eventually, the waves die down a bit and I head back to the warm sand to read and dry myself in the sun. I’ve given up on my micro-towel and am now using my shower towel as a beach towel. Whatever, I’m camping.
At 3:00, I head back to the camper van park, grab my bottle of red, jar of Nutella, package of brie and Kindle, and walk back across the street to, what’s become, my regular picnic area (okay, it’s just two days in a row). As I get set up, I meet Emma and her boyfriend Jeremy (that may or may not be his name; again, I’m really bad with names). They’re from Ireland and are traveling around Australia in a camper van which they purchased for AUD$1500.00. They tried the fruit-picking thing (actually capsaicin, as peppers are called here) and lasted less than a week.
Emma and Peter Piper (get it??) cook their dinner as we talk. Just like most of the Irish I met (except for that Irish jerk in Da Nang, Vietnam – read here) these two are so friendly and enjoyable. We talk long after dark and Emma admits that she had a bit of an attitude when I said I was an American, but realized I wasn’t what she thought of as a “typical American.” She’s lovely and didn’t want to insult Americans and I can only say that I understand what she means and I’ve heard it before. The view of many from other countries is that Americans don’t have a very big world-view. (Can you blame them, what with seeing Trump all over the news? Come on people!)
We clean up and I bring Emma and Peter Piper back to the campground to use the bathroom before they head back to their parking spot, and I settle in to watch another bad movie.
Tomorrow – A final day at the beach and the drive back to Brisbane.

My Kingdom for a Picnic Table Goodbye Van Morrison