I’m back! I know, it’s been a while, but I brought a note from my mom. Well, that’s not true as mom is long gone, though I might have one saved from childhood. The truth is, I’ve been busy here in Canada learning the difference between a loonie and a toonie, what I’ll get if I order a double double is (it has nothing to do with In-n-Out Burger) and what, exactly a toque is (not nearly the same things as a toke, which we’ll get to later). So, with that out of the way, I thought I’d better let you know what Vancouver is like, so here are some highlights.
While much of my time in Canada is dedicated to writing a book proposal, query letter and synopsis to submit to agents, not to mention the actual book, I’ve decided to get out and do a little improvisation. I’d like to do some more lecturing and I’ve found a comedy, improv class which, I hope, will enhance my thinking-on-my-feet skills. It’s also helpful to do a variety of creative things to help get the creative writing juices flowing.
I take the bus, to the ferry, to the bus; for an American, I’m getting pretty good at this mass transit thing. As I exit the ferry, I see a Starbucks in the station and decide that getting jacked up on caffeine prior to an improve class seems like a smart idea, so I step in line. (I’ve never, ever seen a Starbucks without a line.) After waiting for a few minutes, I have a thought and step five-steps to my left and not quite shout to the two security guards, “Hey, can I bring coffee on the bus?”
“Sure,” they tell me.
Six seconds later, I go to step back to my spot and the lady who had been behind makes a sour face and pushes forward past me.
“Oh, I just stepped out for a few seconds to ask if I can bring this on the bus,” I explain.
“I passed by you when you were asking the question,” she responds curtly and turns her back on me. As there are two people standing behind her, that question put me back three places in the Starbucks line. What happened to those friendly Canadians I hear so much about.
I finally get my Pumpkin Spiced Latte and head out towards the bus. After a short ride, I over to to the False creek Community Center where, every Saturday, Vancouver TheaterSports League holds a two-hour comedy improv class. I pay my CAD$15 and wait by the classroom. Angela, our instructor soon arrives, and twelve of us head on in. We sit in a circle, introduce ourselves and begin with our first warm-up game, Zoom. We clap our hands, one at a time, while “passing” the Zoom to the person next to us. After Angela is sure we have this down, we add words like Zap and Sludge (perhaps it wasn’t actually sludge, but I was concentrating on the game). We move on to throwing imaginary balls and making ourselves into one, large, imaginary machine, before creating scenes to act out. 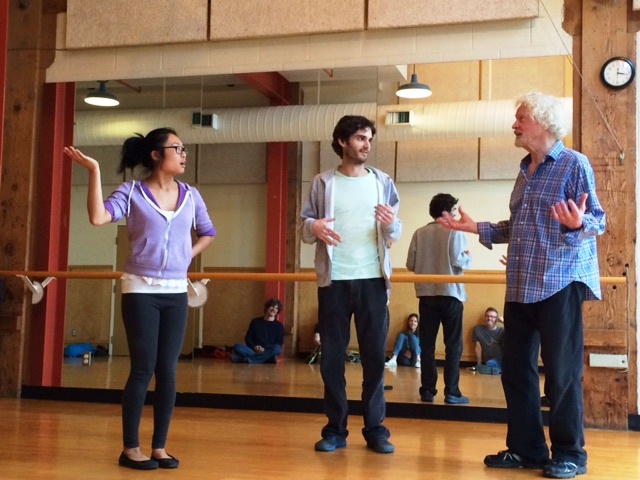 People come to this drop-in class for various reasons. For me, it gets me away from the computer and the work involved in writing a book. Also, I believe the skills I gain will help me in the business world – creative thinking is always helpful. Finally, I’ve now done some lecturing around the world and use some improv exercises to get the audience involved. (I must keep them awake and I’m told it’s better than throwing things at them.) I’m hoping to lecture more and, when you’re speaking in public, being able to think on your feet is helpful.
I ask some others why they’ve come and their answers are as varied as they are. One twenty-something woman is an actress and it’s obvious how an improv class could be of value to her. One man appears to be in his sixties and he just finds it fun. This is his second class and he plans to come to more. One woman tells me that her husband’s company transferred him from Toronto to Vancouver this past summer and, as she had a job in Toronto, but is not yet working in Vancouver, she’s decided to do something new every day. I love this answer. This is her Quest. (See the Drop Me Anywhere Press Page where author Chris Guillebeau profiled me, and read his book The Happiness of Pursuit to learn more about Questers.)
I spend many more rainy days inside dealing with issues at home, and writing my behind off; as Amy Poehler said many times in her book, Yes Please, “Writing a book is hard. (Yes, Amy, but you were asked to write the book and had a job to support yourself. The rest of us spend half our time writing the queries and proposals, and trying to get work to support us while doing it all.) Eventually, a committed writer (or even a writer who should be committed) needs to get out into nature. And I hear a bouncy bridge calling my name.
I catch a bus, to another bus, and then walk a bit more, all to get to Capilano Suspension Bridge. While it only takes about forty-minutes to get there, it’s a world away from the hustle and bustle of my current abode in North Vancouver. The scent (as usual) is the first thing which strikes me. It’s the fresh scent of trees along with the earthy smell of dirt. Today is bright and sunny (which is why I chose today to come) and I’m already feeling refreshed. 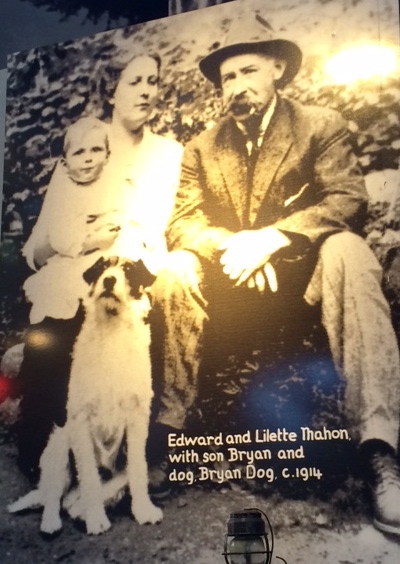 Upon entering, I stop to read the display about the history of Capilano Suspension Bridge. It’s been owned by many, including Edward Mahon who, curiously enough had both a son and a dog named Bryan. (There’s no note on who came first.) As I walk across the bouncing bridge, suspended 230 feet above a gorge, I watch some people skip along as others stare over the side, and still others grab onto the side-rails with a death-grip as if this might somehow help if the bridge suddenly collapsed. When I reach the other end, I see a young man being calmed by a worker as he sits on a bench hyperventilating. He mentions that he’s afraid of heights and I congratulate him on his accomplishment in getting across the bridge (going back will be oh such fun). 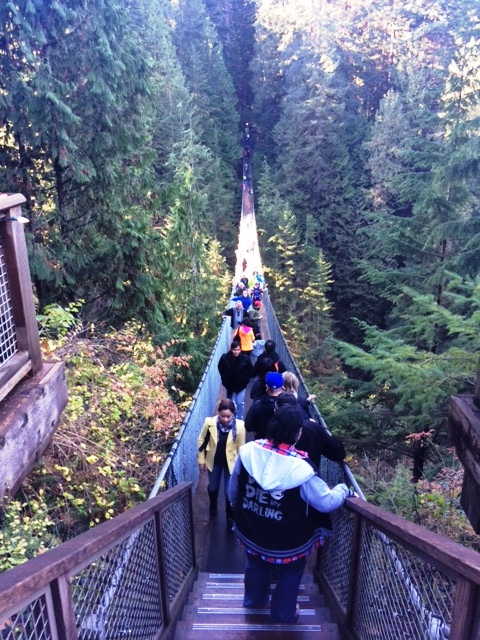 I spend the next hour climbing through the tree-tops on their Tree Tops Adventure, a walkway which reminds me of the canopy tour in New Zealand, yet doesn’t require me to strap into a harness and trust a piece of string (perhaps it was a single metal cable) to hold me up to enjoy the beautiful view. I leave Capilano Bridge refreshed from nature and ready to write some more. 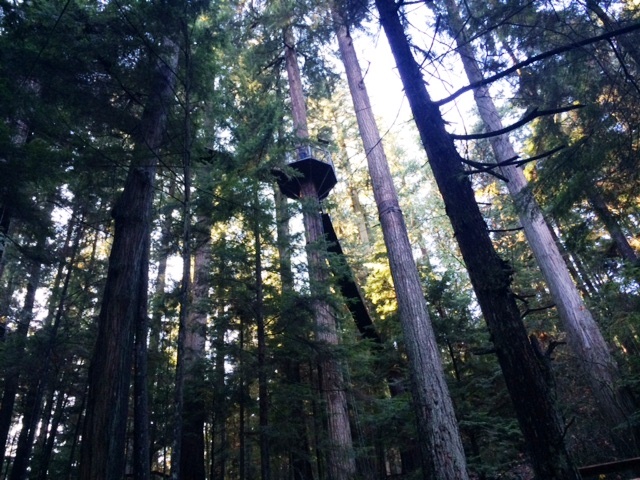 After spending much of the remainder of the week writing, it was time for another break. Remember the toques I spoke about earlier? Those are what Canadians call winter hats. The other tokes are what Americans call a joint, spliff, Mary Jane, or a doobie. While it’s still officially illegal here (though it will most likely be legalized in the very near future), British Columbia is directly across the border from Washington State where it is legal. And Vancouver is a city with pretty lax laws on medical marijuana so, for the price of CAD$0.00 (US$0.00) one can visit a doctor and become a member of the cannabis clinic he works out of. As I found out this week that the people I’d rented my house to, had done some damage, and he had been arrested for assault after having a domestic dispute with his girlfriend (the co-renter), well, I’m a little stressed and decide, perhaps, some medical marijuana might be preferable to an ulcer or high blood pressure so I check out the cannabis culture here. What I find out is that the doctor is only in one-hour per week. There’s also the question of whether I can actually receive a prescription, as they require Canadian government ID.
It turns out they’re very accommodating here; they have lounges where, without a prescription, one can go and enjoy a simple toke. Sort of like going to the bar for a drink instead of buying a bottle at the liquor store. I walk up to one of the many in downtown Vancouver, pay my CAD$5 cover charge, and my CAD$3 for a bowl in a bong, take a seat on a comfy sofa and inhale. . . aaaahhhh. After ten-minutes (or two, or forty; I lose track when I’m high) I’m finally relaxed and able to breathe.
I walk out, higher than Capillano Suspension bridge, and head to the ferry terminal to await my boat. While I have that marijuana paranoid feeling, I’m also aware that I carry with me the herbal smell of hemp and, as I feel people look at me (real or imagined), I choose to stand near a scruffy-looking guy so that others might blame him for the scent of fresh-smoked herbs. Beyond that, I simply didn’t care and, compared to my previous so-stressed-I-might-have-a-heart-attack mood, this was just what the doctor ordered.