Immediately after landing at José Martí Airport, the main international airport in Cuba, and after waiting in the VIP lounge while are bags are loaded onto carts by porters – it sounds fancier than it is as the VIP lounge only really offers a place for the group to stay together, have a somewhat cleaner bathroom experience than the main airport bathrooms (not saying much) and munch on some dry small sandwiches and drink a little booze (ok, it might be worth it) – we head out to the bus. We meet our guide Jorge Jorge; yup, that’s his first and his last name (so nice they named him twice). Jorge Jorge will be with us for the next week, as will our driver Osmani, who we’ll pick up later. (No, I’m not driving; until then we’ll have a temporary driver for half the day.) Jorge, Osmani and I will be a team and will collaborate to make this a memorable trip (in a good way) for our passengers, who have paid good money to be here.


We drive directly to Revolution Square, the location of Fidel Castro’s lengthy speeches – the longest one lasted seven-hours and ten-minutes minutes – (random fact – Fidel holds the Guinness World Record for giving the longest speech ever before the United Nations – four-hours and twenty-nine minutes) – where we see large installations of the outlines of the portraits of Che Guevara and Camilo Cienfuegos, heroes of the revolution. We will see many more statues, portraits, photos and monuments dedicated to Che Guevara yet, as many of us will notice, few such monuments for Fidel Castro. Our guide explains that Che is held as such a hero in Cuba for a few reasons. First, he died young, which gave him martyr status. Second, he wasn’t from Cuba. Che was born in Argentina and joined Cuban revolutionaries, including Fidel Castro, to fight to get out from under the control of the dictator Fulgencio Batista (aah, the irony). Finally, we’re told that Fidel doesn’t particularly like having his image plastered everywhere. I will leave the believability of this up to you. (He seemed to enjoy his long speeches with tens-of-thousands in attendance). 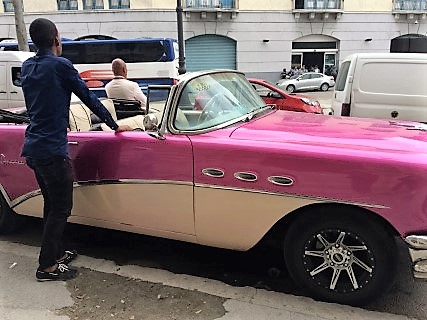 It’s in Revolution Square where we get our first view of the 1950’s cars which have become synonymous with transportation in Cuba. There are two different kinds of these cars here; there are the old beaters which are in definite need of a good paint job, a la Greased Lightning. The other kind, which, at least at this location, outnumber the beaters, are the bright-colored, polished to a near mirror sparkling shine, classics. These shiny ones usually double as taxis for hire. There is one thing the two kinds have in common; while they’re distinctly American on the outside, they’re pure Russian on the inside, with most sporting Soviet-made engines from the good old days.
Another note in the rough political history of U.S.-Cuba relations: Cuba wasn’t all that bothered when America first enacted the embargo – note that it’s officially an economic embargo placed on Cuba by the U.S Treasury Dept. – as the Soviet Union, their communist friend, supported them, both militarily and financially. This was during the cold war and it fell under the enemy of my enemy is my friend. That worked out fine for Cuba. That is until 1991, when the Soviet Union fell. Russia could barely support itself and, therefore, Cuba was left in the lurch. This is the period which Cubans call the “Special Period.” Special meaning, ‘Oh my goodness, what happened to all the toilet paper’ amongst other things. While most other counties have continued to have fine relations with Cuba, and Canadians and Europeans travel there regularly for vacation, it is still a communist country and there is still food rationing. Citizens receive tickets which allow them to stock up once a month. If, as expected, the U.S. continues to relax and even eliminate the embargo, Cuba will remain communist and, while the extra tourism and trade money, and the mass exposure to its democratic neighbors who live only ninety-miles away (think about that – it’s around the same distance from Manhattan to Poughkeepsie, and less than the distance from LA to Santa Barbara or Bakersfield) will certainly change things, for the immediate future, and for the average citizen, there will be much which remains the same. 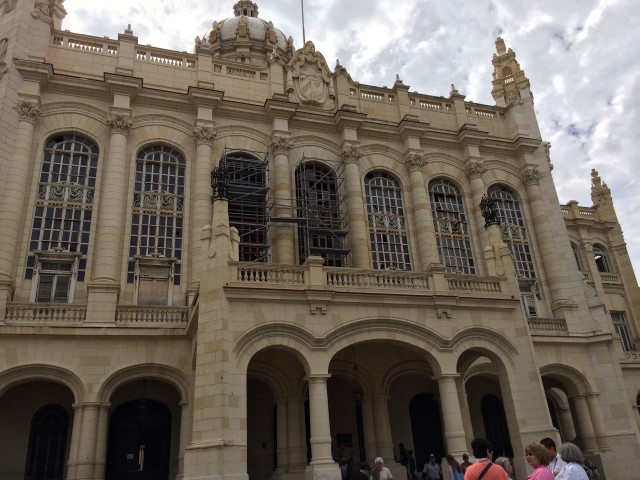 We spend the next forty-minutes checking out the Museum of the Revolution where we see old photos, guns, uniforms and other personal items belonging to the revolutionaries. The museum is

housed in the old palace, which the revolutionaries attacked on July 26, 1953, and where bullet holes can still be seen along the stairway.
We depart the museum for the Hotel Nacional de Cuba to grab a welcome cocktail (there will be many welcome cocktails on this trip) and raise our fists declaring “Viva la revolucion!” The Nacional is the one of the most famous and historic properties in Havana. Opened in 1930, it has hosted Eva Gardner, Errol Flynn, Nelson Rockefeller, Walt Disney, Steven Spielberg, Benicio del Toro, mafia king Meyer Lansky, and more. In 1957 Nat King Cole stayed there after first being denied a room, along with Josephine Baker, due to race issues. Oh, and, our hero, Che Guevara also stayed here. Viva la Revolucion!
I stay behind to the check group into the hotel and catch up on paperwork while the group stops at the cemetery (they saw dead people). On returning, everyone has a chance to stop by their rooms and 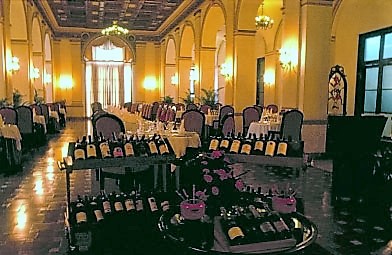 freshen-up before meeting for some more welcome cocktails in the beautiful garden area. We head into our first group dinner in Comedor de Aguiar, the hotel restaurant, which is beautiful to look at and makes me feel as if I’m sitting in 1940’s Cuba and almost any one of the above- mentioned celebrities might, at any moment, walk past (please let it be Errol Flynn). Still, this is a government hotel which means a government restaurant. While workers at government restaurants are government employees (just as if they worked at the social security office or the DMV), Paladars are private restaurants. Most government restaurants aren’t known for the food quality and our dry chicken breast proves this to be true. Still, this is a great group who appreciates that we’ll be experiencing the many varieties of food, accommodations, transportation and cultural experiences which Cuba has to offer.
Coming next – sites, sounds, and people of Cuba.
An American in Cuba Cuban Culture – Music, Art and Tobacco