Nobody Expects the Spanish Inquisition

Are you awake yet? Yeh, me neither. I didn’t sleep well for an unexpected reason. I was freezing. Luis got the air conditioning working in my room so well that, save for turning it off, I couldn’t figure out how to make it warmer. And when I turned it off, within five minutes I was dripping with sweat. Yup, just call me Goldilocks. Or perhaps, due to my Jewish heritage, you can call me Golda Lox.
Well, today’s plan for Golda Lox is to take a walking tour. As I’ve done in the past, I choose a free walking tour as I’ve had generally good luck with them. (You may remember that I took them in Ireland, Portland, and Mexico, which was only free because my friend Stewart took me on one.) These aren’t exactly free as a tip for what you think the tour was worth is expected. Still, because the guide is actually working for their pay, these tend to be very good.
Natalia at my bed and breakfast booked this for me through Free Tour Cartagena and I walk the fifteen-minutes to Santa Theresa Square where I meet my guide, Edgar and about twenty-five other tourists from different countries (though at least half of the group seem to be from The Netherlands).
We begin with Edgar having everyone introduce themselves and say where they’re from. This question gets more and more difficult for me with my most common answer being, “Everywhere.” This tends to either confuse or lead to more questions yet, when I say the U.S. – I don’t say America as some in other parts of North America take offense saying, “I’m American too. North American!” (whatever) – I’m then asked where. As each of us answer, Edgar names the capital of each country or state we’re from. Impressive.We begin walking to our first stop, the statue of India Catalina. An indigenous woman, she was abducted by the Spanish in the 1500’s and, after learning Spanish and converting to Catholicism, forced to become an interpreter for the native tribes. Her figure is now a symbol of Colombia and her statuette is awarded each year at the Colombian Film Festival. As Edgar explains, she’s basically a cross between the Oscar and Pocahontas. 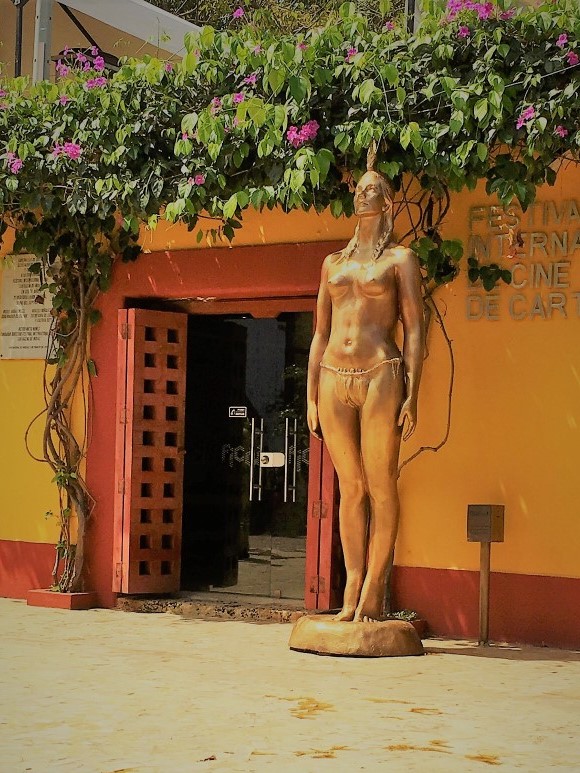 We continue on to various sites including the statue of Pedro Cabrera, a Jesuit priest who made many 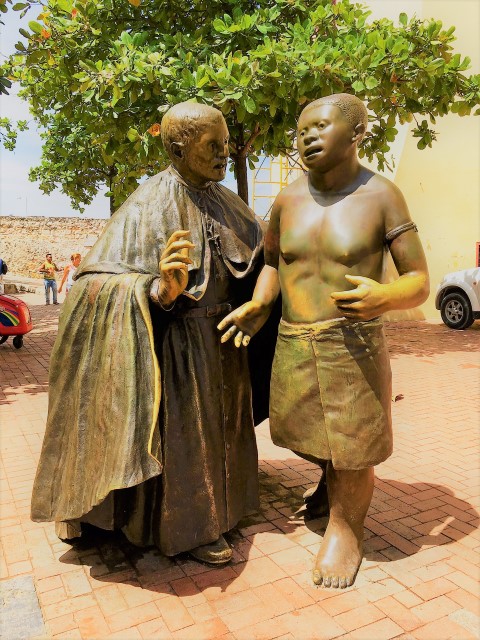 enemies due to his stand against slavery, and to the Iglesia de San Pedro Claver, also known as the San Pedro Church. An impressive structure, it’s made more impressive by the seven-or-so sculptures depicting the everyday lives of Colombians getting haircuts and playing games. 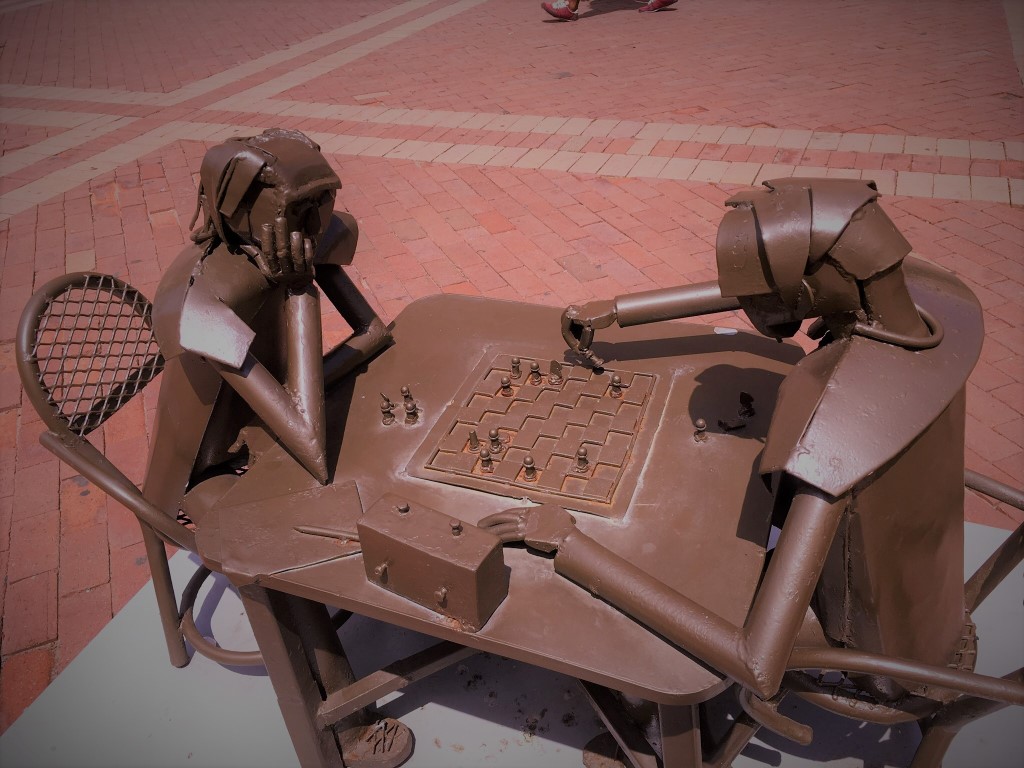 We then stop by the Customs House where we see a loud gathering of men with motorcycle helmets and police standing around. The men are motorcycle taxi drivers who have recently been prevented from working in certain neighborhoods as motorcycle thievery has been on the rise there. Motorcycles speed past people walking on the sidewalk and grab their bags off their shoulders before speeding away. The drivers argue that their work should have to suffer due to criminals who drive the same type of vehicles. The protest is peaceful and the drivers eventually disperse.


Another stop is the Plaza de los Coches, an important location of the slave trade. This is where slaves brought from Africa would be offloaded from the ships and sold often brought to other countries in the Americas.


I’ve learned some things about Colombia on this tour including that there was once one once one country named Grand Colombia which consisted of Colombia, Venezuela, and Ecuador, but I learned more about other countries and other participants. There were a lot of questions on this tour but less answers.
After the tour ends, I grab some lunch at a local healthy fast food restaurant before trying to increase my understanding of Cartagena and Colombia by visiting the Palace of the Inquisition and Historical Museum. As I enter, I witness another protest, this time a silent one in the form of signs. It seems the Museum is now offering a self-guided tour in the form of an app for your phone for which they supply headphones (or use your own). They’ve also written some (not all) of the commentary on signs. This means there’s no need for guides and the signs covering the sidewalk outside the museum are in Spanish and English and make clear the guides’ viewpoint. When I ask the museum staff about it, they explain that the guides were always paid directly by the tourists but never had a fixed price so it changed depending on what the guides felt they could get and taxes paid were questionable. I understand that I’m only hearing one side of the argument but, as the guides aren’t here to ask, I’ll go with that story.
The museum is not the best and not the worst historical museum I’ve visited. In fact, I finally start to understand more of the history of this place; from the indigenous tribes to the inquisition (those were some crazy times) to the slave trade, it’s all here.
As I find out more, I’m becoming fascinated by the inquisition and how so much of what’s happening today is relatable. No, we’re not torturing people with iron pieces which dig into one’s collarbone and chin if one moves. Or developing tools to tear off a woman’s breasts (I can’t even) –  at least in the U.S., but we are judging people based on their ethnicity, heritage, and religion.
I leave the museum finally feeling like I understand a bit more of Cartagena, and I head back to shower the layers of sunscreen, sweat, dirt, and more sweat off of me (feeling very attractive).
I stop to enjoy some street musicians in Simon Bolivar Square. A little girl stands in front, entranced by the musicians and I’m entranced by her. 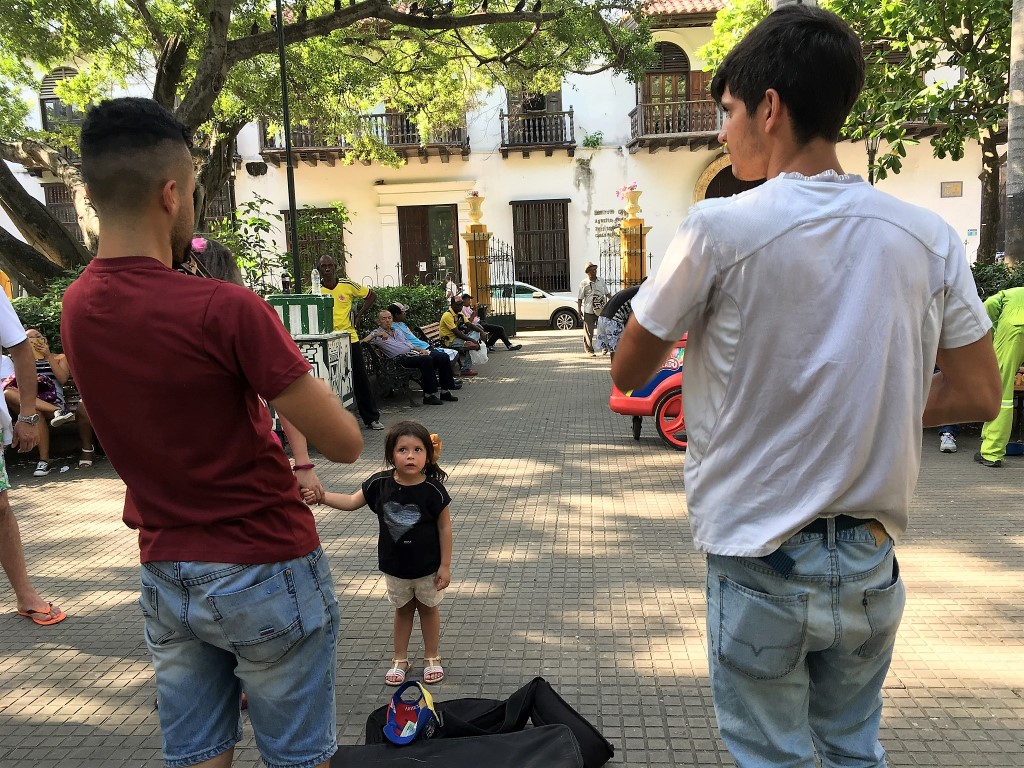 After a cool shower (the hotel says they have hot water and I experienced it for two-full-minutes last night. None today) I head out to one of the many squares to have dinner outside in the breezy night air. Though there are no available tables, the restaurant manager, eager to please, quickly takes care of that as I soon see him carrying a square, four-seater table outside and setting it beside other tables. A chair appears and voila, I now have a seat.
I order a Carne Asada (a delicious marinated flank steak) and some wine, when a street vendor approaches. He sells beaded necklaces and bracelets and, though I tell him I’m not interested, he sits on the ledge next to me and strings a variety of small, colorful stones onto a nylon wire. He then offers it to me for no charge which I politely decline as I understand that it’s expected that I’ll purchase one of his others. He insists, telling me it’s from his “Corazon.” After much declining and insisting, I gratefully accept it. Using my crappy Spanish, we speak about Colombia and just generally chit-chat. As a police officer strolls by – the police act as security guards for many public areas like the many squares – he tells me he’ll return shortly. True to his word, he comes back with a supply of very pretty necklaces and bracelets for sale which, true to my word, I decline. 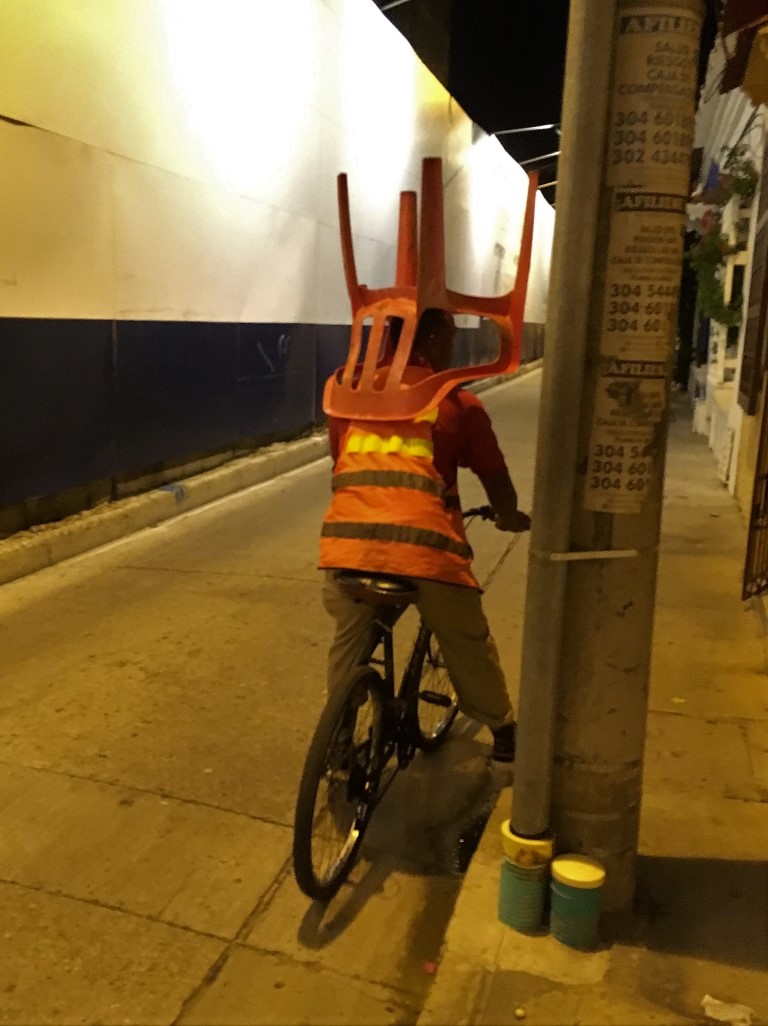 Full or beef and wine, I take the short walk, about five minutes, back to my hotel. On the way, I purchase two Cohiba cigars from a street vendor. I began to enjoy a good Cuban cigar during my first visit to Cuba and enjoy one every once in a while when I can find them. When I arrive at the hotel, I offer Luis, the night desk guy one to smoke with me. He explains that he doesn’t smoke, but we stand outside the door (no smoking anywhere on property) and chat while I smoke. After a while, he goes inside and a man rides up on his bicycle carrying a chair on his head. He places the chair on the sidewalk in front of the next door and asks, in Spanish, if I’m smoking a cigar.
“Yes,” I answer.
“It reminds me of my grandfather,” he says in Spanish.
He tells me that his grandfather used to smoke them and it smelling it gives him a good memory. I offer him my extra cigar and he declines. “My grandfather smoked them but if I picked on up, he would take off his belt and whip me. He didn’t want me to smoke.”
I soon extinguish what’s left of my cigar and head up to bed.

Back in the Saddle The Bizarre Bazurto