Another Side of Colombia

Remember how I volunteer on each trip and tell you all about it here about the organization on www.Rebel-With-A-Cause.org? Today’s that day. Well, it’s at least half that day. I’ll tell you about the volunteering today and, as soon as I get a chance, I’ll tell you about the great organization I did it with on Rebel-With-A-Cause.
We begin at the Volunteer Hostel. Remember Kristy from Cartagena Connections? At the end of our tour of the mercado, she took me to this place, which is not just a hostel, but a place where good deeds are done (nothing like “dirty deeds and they’re done dirt cheap”). The people at the Volunteer Hostel work with local organizations which benefit children’s organizations, low-income areas, indigenous populations, and more.
Today, I’m invited to join Carmen, a social worker from Spain, on her mission at the Institución Educativa de Ararca school in the town of Ararca which is a project of FEM. Carmen came from Valencia on vacation seven months ago and liked Cartagena so much, she decided to stay for a year. She volunteers most days a week with these projects, coming to this school on Fridays. As I mentioned, you’ll be able to read about the project and how you can help, very soon on Rebel-With-A-Cause. In the meantime, just getting there was its own adventure. 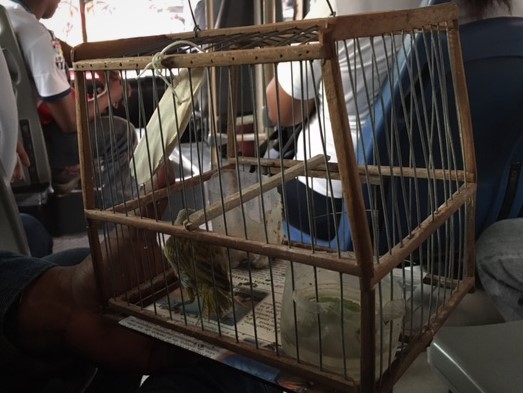 We start by walking to the public bus. Not nearly as crowded as yesterday and the wait time is also a lot shorter. It’s a simple fifteen-minute ride before we exit and walk another fifteen-minutes to another bus; this time 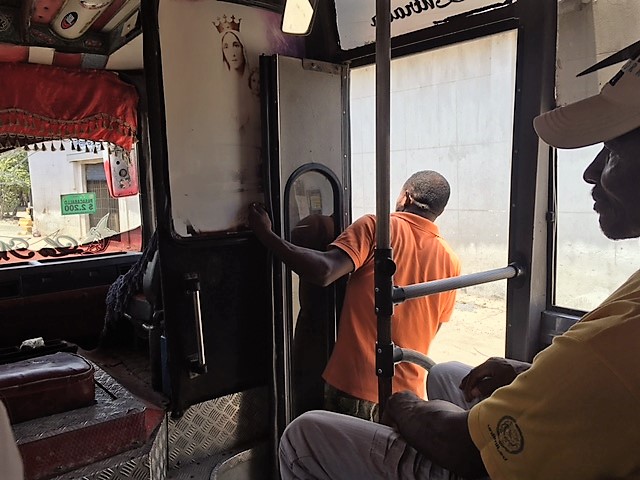 the private one. Remember when I told you that the private ones had no air conditioning? Well, you really begin to notice it during a forty-five-minute ride. Still, the people watching is great. Between the man who sits there with a tiny bird in a handmade cage, to the guy whose job it is to lean out the door of the bus looking for passengers, as well as collecting fares, this isn’t basic cable.
Forty-five-minutes later, Carmen signals for us to get off the bus. She pulls out her phone and two motorcycles soon appear. Instructing me to climb on one, she climbs on the other and we’re off. I’ve not been on a motorcycle, motorbike, or anything with a motor and two wheels since I left Asia. On this trip, 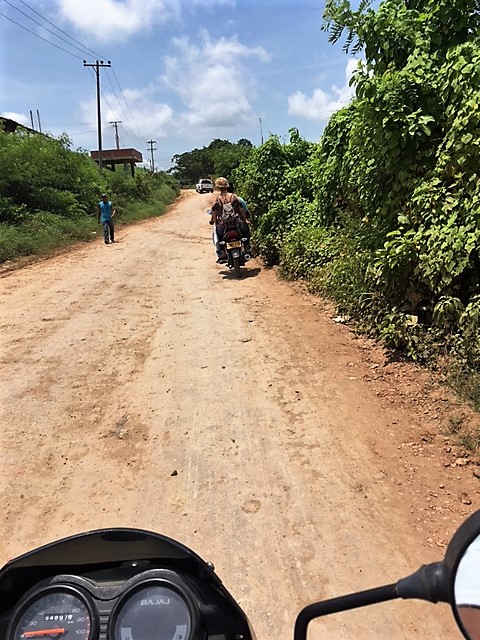 no helmets are provided so my comfort-level is, well, less than comfortable. I say a silent prayer reminding God that I’m trying to do an honorable thing here so a little holy-protection would be appreciated. I decide to trust in God, as well as Juan, my driver. I remember the key to riding on the back of a motorcycle is to not anticipate the driver’s moves so, to begin with, I stare at the back of his head and his Mohawk-like strip of slightly longer hair decorating the center of his scalp.
I’m soon back in the saddle and feeling comfortable enough to take out


my phone and take some photos of the road, the countryside, and selfies of myself and Juan. We ride down dirt roads, soon turning onto just plain dirt. Then onto more dirt roads which, due to some recent rains, involve Juan choosing the best course through long, wet, muddy ditches and, eventually, onto a paved road.
Finally, twenty minutes-later, we arrive at a lunch counter around the corner from the school. In all, the one-way journey takes an hour-and-forty-minutes. As we have almost a half hour before we’re needed at the school, and neither of us has eaten, we order some tasty hot food at the small outdoor restaurant/lunch counter and get to know each other better.


Tummies full, it’s time to get to work. Walking around the corner, we enter the school through a courtyard where various people greet Carmen with friendly, holas and como estás before she introduces me. Here in Colombia, as in most Latin countries, I go by Carolina as people just don’t seem to understand Carole. Our first stop is the library where Carmen speaks with a teacher. We then enter a classroom. This first class is comprised of students ages eight to eleven and is actually two classes totaling about forty-five students. The boys are dressed in blue pants and white shirts and the girls wear skirts. All are rambunctious. They’ve spent the morning making abacuses and I’m impressed that they’re learning about these as I must have missed that day in school because I have absolutely no idea how they work. I’m hopeful they can teach me until I hear them refer to them as maracas while the beads click as they shake them and dance. 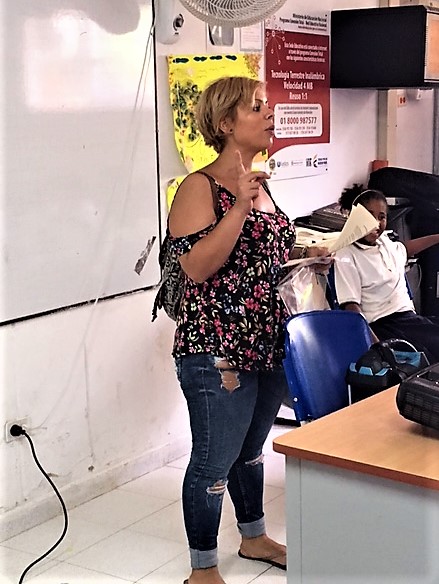 Carmen is here to teach history the history of these children’s parents, grandparents, and ancestors. The children are divided into three groups. You’d think this would be easy as the children are gathered in a circle and she instructs them to count off, 1,2,3,1,2,3. . . Yet somehow, it’s not. Whether they don’t understand the concept or, more likely, they’re just messing with her, this takes a good five minutes. Finally, the children have counted and each group is told to gather in a different corner with different teachers. Of course, there’s drama as one girl insists she’s in group three while the girls around her tell her she is in group two. I suspect she wanted to be around someone in group three or, perhaps, didn’t want to be around someone in group two. Whatever the reason, I explain that it really doesn’t matter and she can join either group. Oh, the drama with little girls. 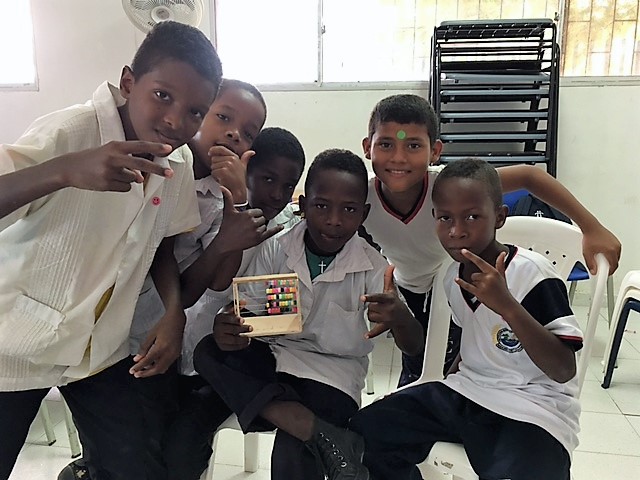 Carmen and the other teachers do their best to engage the kids with a story about a child speaking with his grandparents, but most of the children are distracted (and distracting) and, after the story is read, they’re each given a piece of paper in order to draw pictures of their family and houses. As the kids turn in their work, they receive a sticker from Carmen, and it’s then that they show their creativity. Some put the sticker on their shirt, while others place it in the center of their forehead as if they are from India. Still others choose to pretend their sticker is an earring. I spend some time refereeing while the kids take turns trying on my hat. There’s a lot of grabbing and pulling it, but the hat is always an ice-breaker when I’m working with children. The kids run around the classroom chasing each other and playing very rough before being herded out as more students enter.
These kids are younger – 6-8 years-old. Still rambunctious and rough-playing but, as they’re smaller, the furniture isn’t tipping over as much. For some reason, the kids from the previous class keep trying to sneak in. (I don’t know about you, but I was always trying to sneak out of class.) Finally, the door is closed, but another teacher enters, speaks with Carmen, and we’re all on our way out of the room with the kids yelling, “arriba.” We head to a classroom upstairs. Unlike the last one, this room has no air conditioning.
The heat in Cartagena is brutal; made even worse by the massive humidity. Each night I hang the clothes I’ve been wearing up for the perspiration to dry so I can wear them again. I know, it sounds fairly disgusting but, in the morning, when you know you’ll be drenched within an hour, you figure, why bother? This also goes for my curly hair which now includes my new morning styling routine of staring in the mirror, saying “whatever” and, like most others, slapping on a hat. 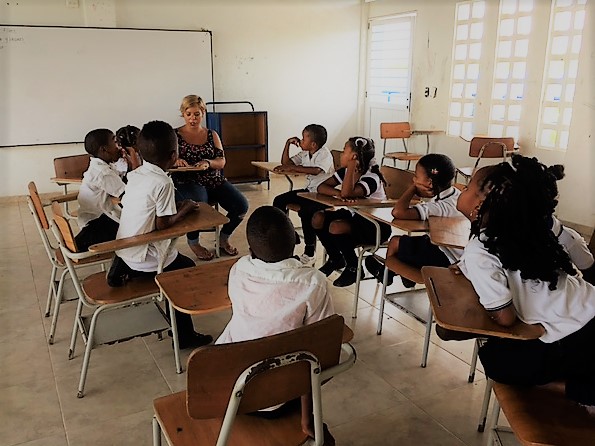 So, we’re now in this room with the younger kids doing the same exercise during which Carmen asks a boy and a girl to leave the room as they’re climbing inside a podium on wheels and wheeling each other around – a second offense as I put a stop to the first one. Still, things go a little more smoothly in this class.
By around 4:30, our work here is done. We say our adioses and head out to the street looking at the darkening sky and listening to thunder in the distance. Carmen calls the driver who tells her he’ll arrive in fifteen-minutes. True to his word, fifteen-minutes later he and another guy pull up and we hop on. The skies continue to darken and thunder rolls in. We drive along the paved road, over a bridge and through the dirt streets of a small town. It’s obviously a poorer area and Spanish-language music blares from some buildings, a faint smell of smoke from cooking on open fires wafts through the air and children play with sticks and balls out front as dogs roam throughout. Some of the dogs appear well-fed and stay close to people and it’s obvious they’re the family pet. Others ribs show through their thin fur and there’s no doubt that they belong to the large stray community. One would hope that Colombia implements a spay and neuter program soon.
After twenty-minutes, drivers paid, we climb off the motorcycles and board the public bus for our forty-five-minute ride to the city. I speak with Carmen about the kids. It seems a bit of a juxtaposition as the people in Cartagena are very polite and low-key, yet the kids at the school played very rough with each other and hitting (hard) didn’t seem unusual or a reason for discipline. She explains that the kids in these outlying poorer areas are different from the children in the city. I understand and hope for a successful future for these children.

Tomorrow – An evening in Getsamani and a bus to the jungle.
The Bizarre Bazurto Moving to Minca