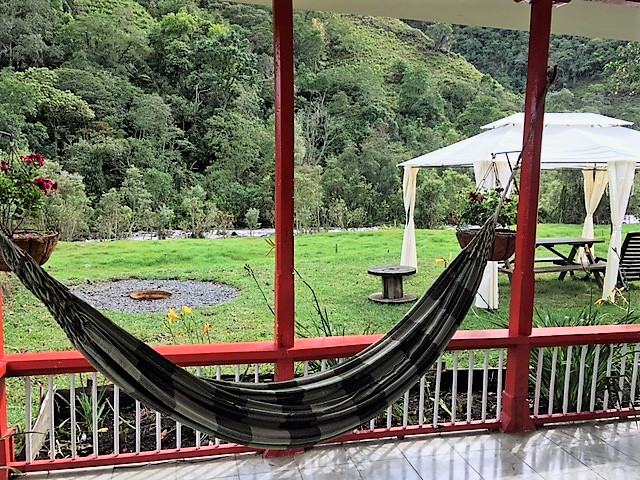 Following yesterday’s long hike, I wake expecting to feel more sore than I do. With just a little tenderness in my quadriceps, I choose to have a relaxing morning hanging on the farm and writing. A light on-and-off rain is falling and the various chairs scattered on the porch surrounding the building are very comfortable. I’m sure the hammocks also are but I have yet to perfect the skill of hammock-writing.

By 3:00 pm both the writing and the rain are finished and it’s time for a horseback ride. There’s no need to schedule the ride with a tour company as, La Cabaña Eco Hotel, doesn’t only have cows, but horses too. While my guide, Andrés, saddles up the horses, I get to know Carrot and Caroline. No, these aren’t the horses, but a couple of twenty-something Dutch women who will also be riding today. While her real name isn’t Carrot, it’s something which sounds quite similar and, understanding that non-Dutch people have difficulty with it, she throws me, well, a carrot, and invites me to call her that. Immediately, I impress them with my knowledge of the Dutch language which I learned from sailors, saying in Dutch both, “Hello, how are you?“ and, “Your fly is open, Dickhead.”

With our flies closed, we climb up on our horses (some more gracefully than others) and begin walking off the farm. My horse, a beautiful mare named Tequila, seems to have a crush on the male horse which Carrot rides, getting her nose close enough to his butt to catch a whiff of his farts the second they exit his rear, which they do quite often.

The ladies have never ridden horses before and, while I got quite good at it during my adventure tour-guiding days, it’s been some time so, when they request to go slow, I have no problem with it.

Crossing the road, we ride through a field which, like all fields here in the Corcora Valley, is blanketed by greener-than-green, soft grass. Three of the ranch dogs accompany us, running alongside seeming to 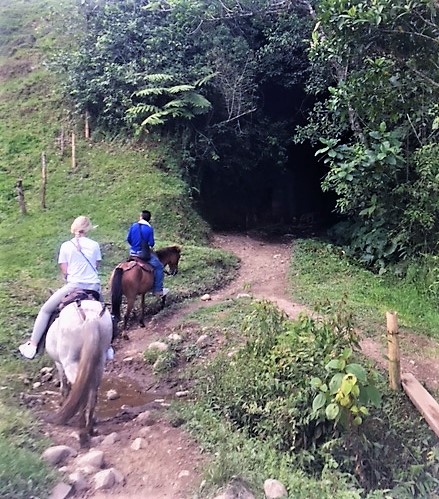 understand their job of taking care of the riders and making sure the horses behave. The field soon takes us to a trail just as muddy as yesterday’s, only this time it’s the horses’ hooves being covered by the slippery brown mess. Before long the trail skims the side of a green hill and I reflexively lean in towards the hill as, should the horse misstep or slide in the mud as I did all day yesterday, I’ll get a close-up look at the bottom of a canyon. The ride takes us through paths of flowering trees which open up to beautiful tree-dotted hills displaying every shade in the rainbow, as long as that rainbow is green. With the variable weather, the clouds which hang over the hills sometimes giving way to sunshine provide a hundred-different views of the same vista.  All the while Tequilla, my slutty horse, has her nose so far up the ass of her boyfriend in front of us that, one good sneeze and she’ll be flying out of his nose. 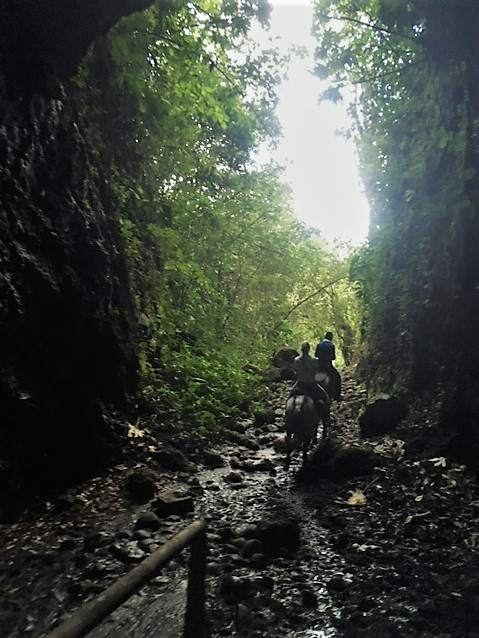 About 45-minutes into the ride, we enter an old railroad tunnel. As the horses click along the partially-buried old trestles, I look to my left and see a statue of the Virgin Mary placed in a small arch carved into the wall. I’m not sure if it was placed there when the train was active, or even if it’s a tradition in all tunnels in Colombia, but she stands there now keeping watch over less-than-skilled horse-riders during the day and the jungle flora and fauna at night.

An hour into our ride, we park (does one park a horse? maybe dock?), Andrés helps us dismount and, walking with our “I just got out of the saddle and can’t seem to bring my legs together” gate, we take a short, somewhat painful stroll to a waterfall. This one isn’t like those in Minca where swimming was an option, as there’s no easy place to enter the water. Still, it takes nothing away from the beauty of it. 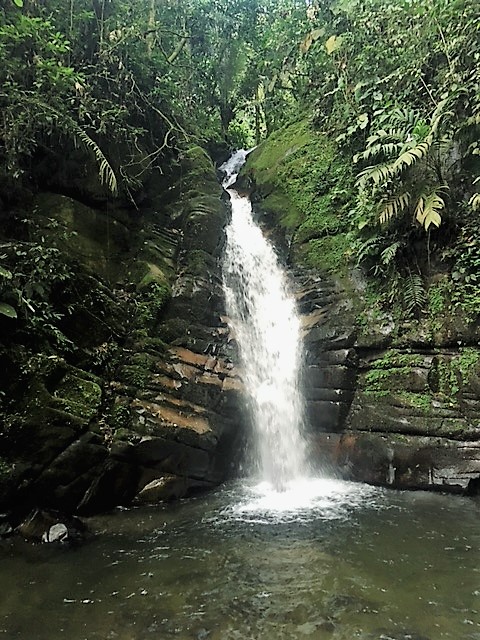 “Hey, you, get back there and make that horse get a move on.”

“Check up on that redhead because I’m not sure she knows what the hell she’s doing.”

Arriving back at the farm, I hop in the shower and head back across the road to the main house. It’s a special night as Hector, the owner, is making his famous Lomo al Trapo. Coating a loin of beef in salt, then

wrapping it tightly in cotton and tying it with string, it looks like a Indian baby swaddled in a cradle board. He places it into a fire pit filled with gray coals emitting bright orange heat from a fire he started an hour before. 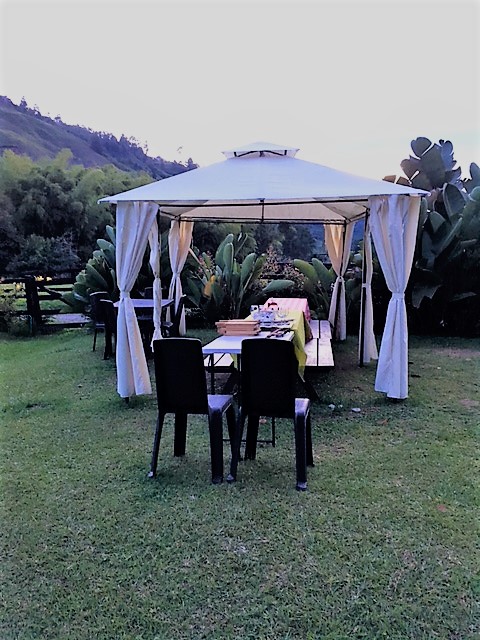 A long table decorated with wine glasses, bread, a salad, potatoes, and sauces is set out on the lawn under a tent next to the fire ring. There are also marshmallows which, some of my fellow travelers, two little girls from Switzerland, decide make great appetizers (who am I to argue?). We eat our marshmallows and drink our wine and, soon enough, the steaks are done. 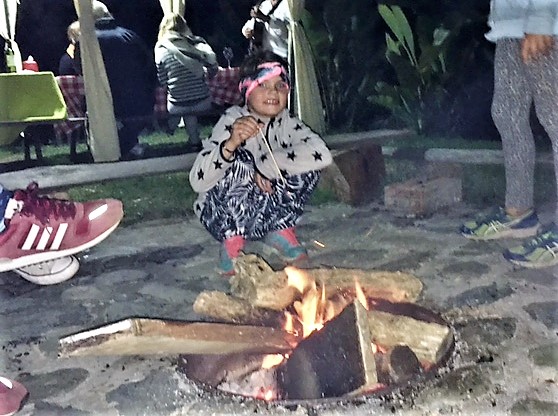 From the wonderfully prepared meat and the fresh salad, to tasty red wine (oh, and the marshmallows), this is an excellent meal. Of course, there’s a dessert of fresh fruit (Colombia is all about the fresh fruit and you can buy at least ten different kinds of freshly-made juice on just about any street-corner) and cream. 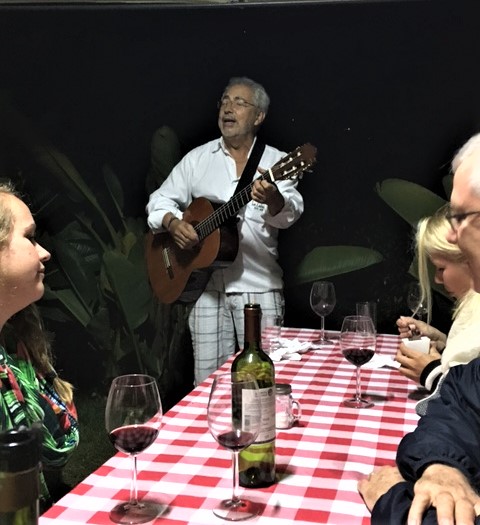 We finish our meal and Hector pulls out his guitar. This is not “Karaoke Night on the Farm,” but a wonderful local experience of dinner and entertainment, both provided by Hector. It turns out, not only is he an excellent cook and welcoming hotelier, he is also a fine singer and guitarist. He sings traditional Colombian songs and, Gustavo, another guest, originally from Colombia, invites me to dance. The night is magical as, fueled by good food and wine, we dance to music under the stars. Calm down, there’s no magic between myself and Gustavo as he is joined here with his husband Leo.

In the past week, I’ve done a four-hour walking tour, a five-hour hike, and a two-hour horseback ride. All I can think is, why am I not skinnier? Oh, and then there’s the marshmallows.

Tomorrow – Wake up and smell the coffee.

How Green Was My Valley The Good, the Bad, and the Gracias's – Colombia