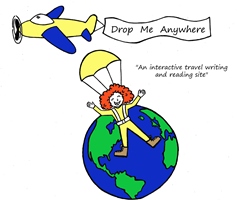 We have a winner for our first vote on Drop Me Anywhere, and let me just say, you people have a sense of humor. Without further ado (feelin’ a bit Shakespearean), our winner is St. John’s, New Foundland! What? Where? It’s somewhere up in Canada. Let me explain how we got here.

When voting opened on January 1, I had decided that this first vote would be a tribute to fellow adventurer Jimmy Buffet. One of his many iconic songs is “Boat Drinks.” In this song he sings, “I gotta fly to St. Somewhere” while dreaming about going someplace warm during a cold winter. Perhaps one of the many Caribbean islands; maybe St. Thomas, or St. Maarten, or even St. Barts (aka St. Barths, St. Barthelemy, call it what you like, spellcheck doesn’t recognize any of them). I listed these places as options for places to drop me. I also listed some other options, St. Paul, Minnesota and St. Petersburg, Russia in order to get you to think outside the box. Who knew that you would not only think outside of the box, but break out of it, climb on top of it, jump up and down and scream, “Box! We don’t need no stinkin’ box!”?

Actually, the chosen location came from a Facebook and E-mail campaign started by my friend, Shaunah. You see, she lives in Vancouver, Canada, a beautiful city with a lot of fun things to do. But she’s thinking about taking a trip to St. John’s, Newfoundland and thought ‘why not send Carole to scope out the place? She can let me know what fun activities there are, where I should stay and what the people are like.’ To this I say, “Bravo!” That’s one of the reasons I started Drop Me Anywhere and that’s why you decide where I go. Just think of me as your advance team (well aren’t you fancy).

Since Shaunah wanted to hear a first-hand experience of the place, she shared the voting page with her Canadian Facebook and E-mail contacts asking them to share their national pride (as Mayor Rob Ford and Justin Bieber were falling down on the job lately) and vote for St. John’s. Well, her campaign snowballed (as anything would in St. John’s in January) and, with a 29% of the votes, St. John’s, Newfoundland is the new “must go” destination for February (at least for me).

I hope to leave in about two weeks. In the meantime, I’ll be getting ready by pretty much doing nothing. That’s another reason I started this, right? To get you more comfortable with traveling without a plan. So I’ll book a flight and, depending on what time that flight arrives, I’ll book someplace to stay for a night or two. But then, well, who knows? The two things I do know are that I won’t die (probably) and it will be an adventure (definitely).

So be sure to click on that subscribe key and follow Drop Me Anywhere on Facebook and Twitter to keep up with me, hear about this trip and find out when our next vote is announced. Oh, and don’t forget another reason I started this – once I arrive, I’ll be finding an organization to volunteer with a then tell I’ll you about it on Rebel-With-A-Cause. So you might want to subscribe there too!

Coming up next – Oh Canada!

Hurrah! So glad you don’t have to scramble to get to Russia on such short notice. I’m a fan of Canada and snow, so I can’t wait to read about your adventures.

Thanks! I can’t wait to tell you about those adventures. Give me just about two weeks and I’ll start telling you all about what adventures are out there.

Bon voyage! We have Ann Arbor friends who spend six months of the year (summer and fall) near there. They say it’s a wonderful place.

Thanks! Betting those 6 months they spend there don’t include February. Let’s see what it’s like off-season.

Not sure about February per se, but my friend gets posts from folks up there who say it’s great. Since I’m not a fan of winter, I would probably disagree. All I can say is dress warmly and get heavy-duty winter gear!

Funny I was thinking it was St John’s BVI. Duh

Congratulations, err, I think?! Seriously, this is such a unique and very cool concept that I look forward to reading more about how this big adventure plays out for you. Kudos for your initiative, and heh, what’s not to love about those Cannutts [sp?] no matter where they live? Here’s to hoping it’s an eventful journey since that will make for better writing!

Thanks so much for reading and for the kind words (although I think they’re Canucks, but I’ll add it to the list of questions I intend to find answers to while I’m there). I stopped by your site and am wondering why you seem to have stopped writing. I really liked the feel of your ‘feeling the thunder’ post. I hope you get back into it.

Not Quite Lost | Drop Me Anywhere

[…] in the far east. No, not the Far East, as in East Asia, but far east Canada. . . in February. (Click here for those first stories) You may remember that I eventually sold my car, furniture and clothing, and used my savings in […]